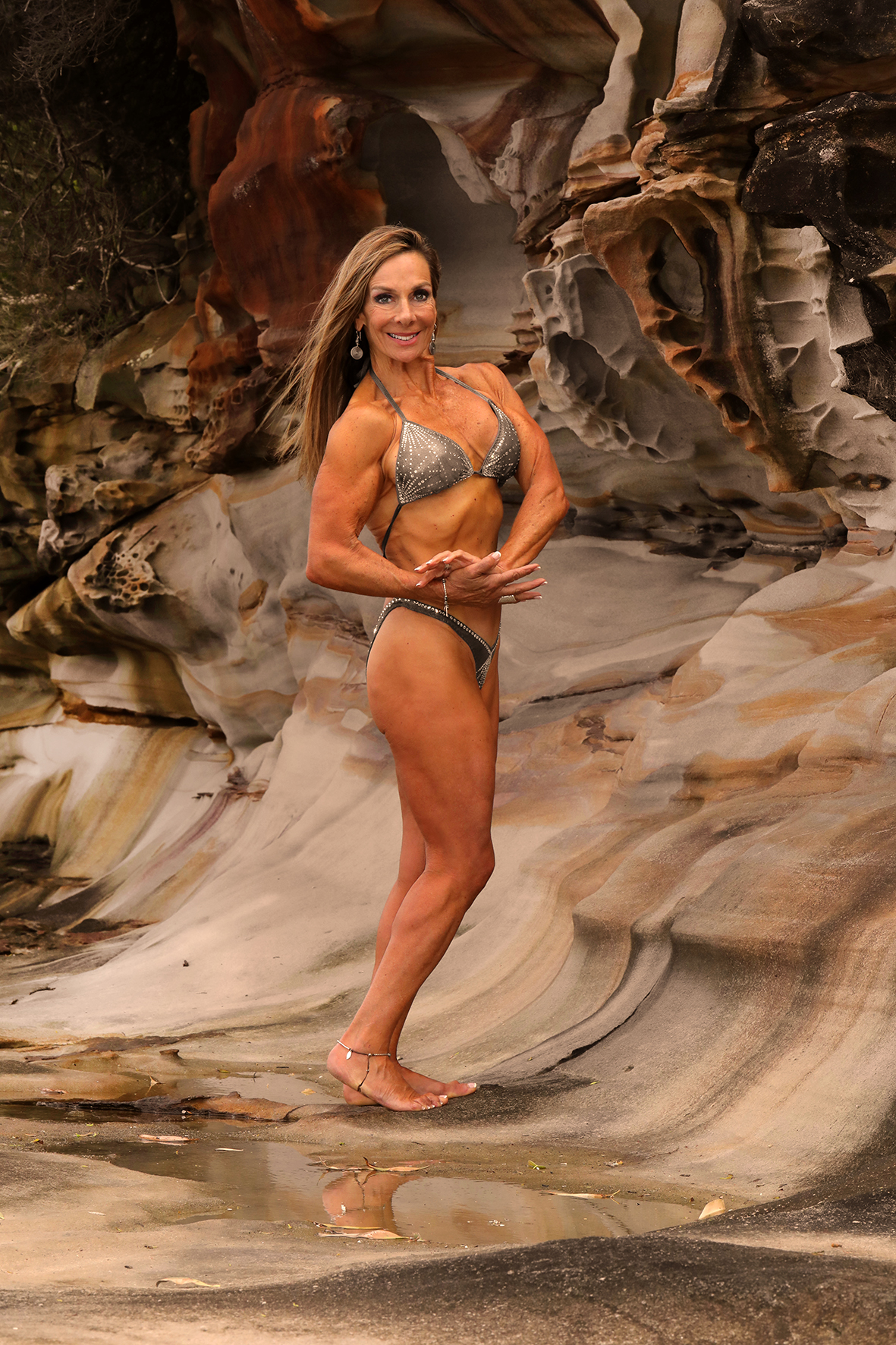 In this image, I am 60 years old, and two days prior I competed in a 2022 bodybuilding competition. The sandstone backdrop reflects the many layers to my story and how I came to this sport. Quartz and feldspar, which most sandstone is comprised of, are two of the most resistant minerals to weathering on the earth’s surface. I have weathered the storm of what life has thrown at me. I am vulnerably strong, knowing my worth is not based on what I do or not do. And I stand on this rock with my head held high.

I started competing in women’s bodybuilding in the early 80’s when I was just twenty years old, but when a boyfriend insisted that I stop – I did. I had acquired anorexia nervosa – but it wasn’t from body dysmorphia – it was the fear of losing his ‘love’ and that of my parents, who were proud of what had achieved. I believed love came in the form of pleasing them and I became a more compliant daughter and wife. The dominant thought of anorexia was “If I don’t do this, I won’t be of value.” For me it was not about body weight or body image – it was about needing to feel valued in order to be loved.

My physical health was restored after 2 years of battling anorexia nervosa and took up resistance training to restore my physical health. I feared the threat of hospitalisation from my doctor. But mostly, I feared the loss of the love of those closest to me. 25 years later, after becoming divorced, I decided to start Bodybuilding again. It gave me a goal to focus on, a way forward in what was a difficult time in my life. My psychologist used increased increments of resistance training and as an analogy to strengthen every layer of unlearning of unhealthy thoughts I had of myself and to stop the crumbling of my sense of worth by other’s expectations and people-pleasing. However, my diagnosis of severe clinical depression led to me making poor decisions which resulted in me being imprisoned for 11 months. Before sentencing, a forensic psychologist asked me what the dominant thought I had before breaking the law. It was “If I don’t do this, I won’t be of value.” This type of thinking over decades weathered down every part of who I was, reducing me to a crumbling mess of self-loathing.

Resistance training has helped restore my mental health. My psychologist said to me in the first visit I had with her, that one day I would walk with my head held high. That I do, when I am working with women impacted by the criminal justice system. I instill in them a belief to love who they. The work I do also educates the fitness industry on how to support clients at risk of eating disorders.

‘Seeking approval eroded my self-worth, but in resisting, I found my strength and resilience’ – Eleni